Persons addicted to methamphetamine develop serious health problems, but there is less understanding surrounding the high numbers of law enforcement personnel who experience significant symptoms associated with clandestine methamphetamine drug lab investigations (CDC, 2005). While symptoms may be transitory, many individuals have persistent symptoms causing them to seek medical attention.

Responding to an active laboratory has been associated with a 7- to 15-time higher risk of becoming ill when compared to other activities with apparently lower chemical exposures. According to Marshall (2000), since 1993 “the number of clandestine drug laboratory investigations has continued to increase, making Utah the number one state for per capita methamphetamine laboratories.”

In 2007, the Utah Attorney General investigated a sauna-based detoxification regimen operating in Manhattan for treating chronically ill rescue and recovery workers exposed during the September 11, 2001 World Trade Center attack and collapse. A senior police officer and a professional firefighter who were ill after methamphetamine lab-related exposures in Utah attributed substantial health improvement after receiving this treatment.

The nonprofit American Detoxification Foundation (ADF) established and administered the Utah Meth Cops Project (UMCP), which uses the Hubbard detoxification protocol and monitors health and quality of life among Utah police officers, to address the symptoms consistent with (and appearing after) line-of-duty exposures to methamphetamine and related chemicals.

Description of the Study Group, Inclusion, and Exclusion Criteria

This is a retrospective medical chart evaluation on the first 69 police officers sequentially entering the UMCP between October 2007 and July 2010. Officers were recruited through outreach efforts by project staff, word of mouth within the police community and referrals by their Chiefs of Police or County Sheriffs.

The Medical Director included participants according to their comprehensive history and physical examination, EKG, and blood analysis (metabolic and liver panels, hepatitis B, C and HIV screen, complete blood count, and thyroid panel). Further tests were done, including testosterone levels, when direct questioning revealed problems that warranted evaluation. Officers with debilitating symptoms had some priority; no preferential treatment was given for the number of meth-related exposures, age, gender, or police rank.

Symptom changes and quality of life were assessed using a baseline history and physical examination, follow-up interviews, and a series of pre- and post-treatment assessments:

For safety evaluation, any adverse events or interruptions of the protocol appear on the daily report form and are assessed by the Medical Director.

A total of 66 men and 3 women, averaging 44.6 years of age enrolled sequentially with a 92.8% completion rate; 5 men did not complete the treatment. Mean treatment length for the 64 patients who completed the treatment was 33 days.

Discomforts or other “adverse event” (which phrase means having emotional or illness-like symptoms) did not interfere significantly with the delivery of the program. For example every participant experienced the transitory flush or itchiness caused commonly by niacin but this did not interfere with delivery and participants completing the program. As Table 2 shows, many participants experienced temporary effects such as feeling despondent, having momentary cough, fatigue, etc. These were all transitory and did not require medical consultation. Sleeplessness did alter program delivery occasionally. After a night with less than full sleep the program was delivered in a reduced capacity the next day. Two officers had gout, one of which discontinued the program.

Change in Health-Related Quality of Life

Figure 2 displays in graphic form the mean pre- and post-treatment SF-36 scores calculated using RAND methodology and compared with US population norms for those officers who completed the regimen.

Mean values of the officer pre-treatment health-related quality of life scores were significantly lower than RAND population norms in all nine sub-scales except role limitations due to physical health and role limitations due to emotional problems. Post-treatment, the officers’ scores showed statistically significant improvements when compared with pre-treatment scores. Officers’ post-treatment scores were also significantly improved for all sub-scales compared with RAND population norms.

Participants averaged 5.8 hours of sleep per night pre-treatment, which improved to 7.6 hours on completion.

This questionnaire was administered from officer #20 onward. Excluding incomplete data, there were 38 matched pairs of pre- and post-treatment responses (84.4% response rate). The mean pre-treatment neurotoxicity score was 65.5, while the post-treatment mean score was 14.6.

In this small group of 69 individuals, it is surprising that 2 subsets of 17% of patients showed low thyroid and/or low testosterone status. Prevalence of hypothyroidism in the United States is about 5%. Preexisting thyroid imbalance may predispose officers to chronic illness, but low thyroid status may have directly resulted from methamphetamine-related exposures, in light of the causal relationship between environmental chemicals and low thyroid function.

Also unusual was the symptoms in common among those reporting chronic ill health. More than 75% of officers reported all the following nine symptoms: fatigue, insomnia, headaches, heartburn, personality changes, numbness in hands and/or feet, memory loss, a prior history of allergy symptoms, and poor concentration. This symptom cluster raises the possibility that “exposures in common” may have triggered “symptoms in common.” This symptom pattern may help future researchers or treatment professionals better recognize or classify methamphetamine-related exposures. The “pre-treatment” SF-36 scores of methamphetamine-exposed officers indicated more pain, more fatigue, and sign of significantly poorer health than the general population.

It is within this context that the Hubbard sauna-based treatment protocol was utilized. If chemical exposures and/or contamination caused these chronic symptoms, then a multifaceted “detoxification program” was a reasonable approach.

To our knowledge, this is the first time a sauna-based “detoxification program” has been evaluated in methamphetamine-exposed police officers. The vast majority completed the regimen with minimal discomfort or inconvenience, achieving significant reductions in their symptoms and measurably improved the health and quality of life. This suggests that this program could help similarly exposed police officers elsewhere.

Studies & Reports
The Narconon Drug Education Curriculum for High School Students: A Non-randomized, Controlled Prevention Trial A Simplified Method for Routine Outcome Monitoring after Drug Abuse Treatment Methamphetamine exposure and chronic illness in police officers: Significant Improvement with Sauna-Based Detoxification Therapy
Table 2. Regimen safety: adverse events experienced during the sauna protocol
n = 69 patients (patients may experience multiple events)
aPer protocol, patients who achieve less than 6.5 h of sleep have their next day’s treatment shortened to 10 min of exercise and 4 sauna sessions of 10 min each separated by 10-min breaks.
bThis patient reported substantial health improvement but had insufficient sleep throughout the program. Treatment is considered incomplete for purposes of all data analysis.
cBoth patients reported episodes of gout prior to starting the regimen.
dTwo officers allotted insufficient treatment time and had to return to work; the third discontinued, citing work-related factors and also missed 6 days in the middle of the regimen. 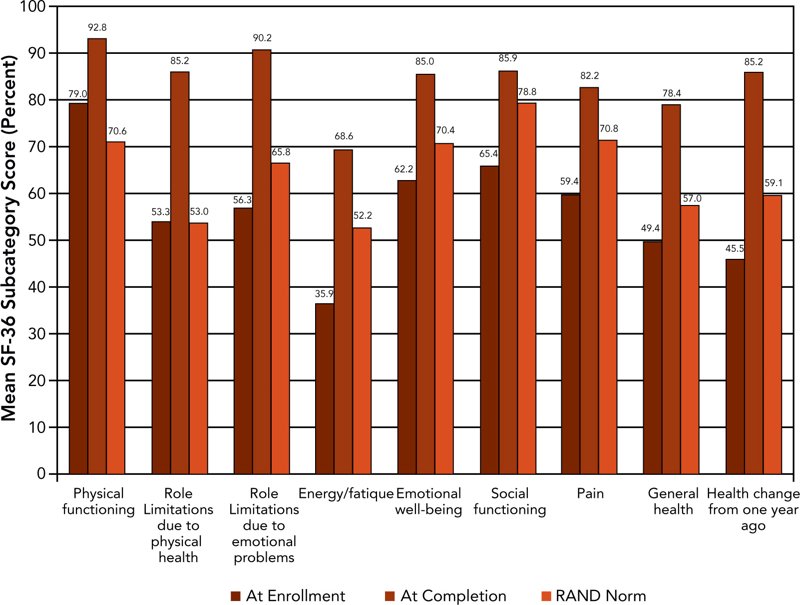