On the fifth of May 2018, the morning dawned warm and sunny after two days of constant rain, just in time for the grand opening of a new Narconon drug rehab center.

In Osnago, just outside Monza and not far from Milan, Narconon Aurora was ready to take its place among the dozens of other Narconon centers around the world. At this center as in all the others, those who are addicted will be welcomed warmly, helped to detoxify their bodies from the poisons they were consuming and then be taught strong new life skills.

By noon, staff and volunteers were busy arranging chairs and tables in the garden in expectation of more than one hundred guests who would soon gather. By three o’clock, everything was ready for the ceremony to begin.

The director of this new Narconon center, Paolo Stucchi, welcomed the guests and talked about his own recovery from addiction a decade before. He had started using drugs and alcohol when he was just 14 years old. After five years of failure in school and serious moral decline, his mother found Narconon and convinced him to leave his addicted life. Fortunately, he agreed.

After graduation from Narconon, he knew he had to help address the drug problem in Italy. First, he delivered the Narconon drug prevention curriculum to more than 50,000 students in Italy. Then he realized that he could do much more: he could open a new Narconon drug rehab center. The result of that realization is Narconon Aurora.

In this beautiful villa in Lombardy farm country, those addicted to alcohol, heroin, cocaine or other drugs will get the support they need to create new, sober and productive lives. Every room has been converted to its new purpose. A pristine new sauna will enable each person to wash out residues left in their bodies after alcohol, heroin or other drug use. There are also classrooms dedicated to teaching life skills classes to help each person resist the temptation of drugs or alcohol in the future.

Cheerful common rooms are provided for meals, relaxation or socializing as people learn that life is more enjoyable when they are sober. There are bright accommodations for each person who will live at this center until they are ready to create a positive new life.

Surrounding the villa, there’s farmlands and woods. In fact, this new rehabilitation center is located within the boundaries of the Regional Park of Montevecchia and Valle del Curone.

In this calming environment far from dingy street corners where drugs are sold, it’s possible to leave pain and fear behind and focus on a brighter future.

A new, holistic center that helps those in Northern Italy learn how to enjoy productive, sober new lives benefits every family and every community in the area. This is where hearts that were once broken can be healed. This is where addiction can become part of the past and the future can become bright once more. 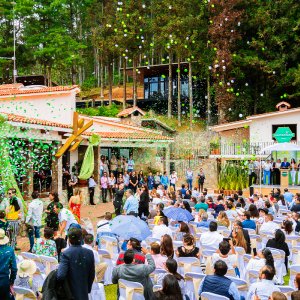